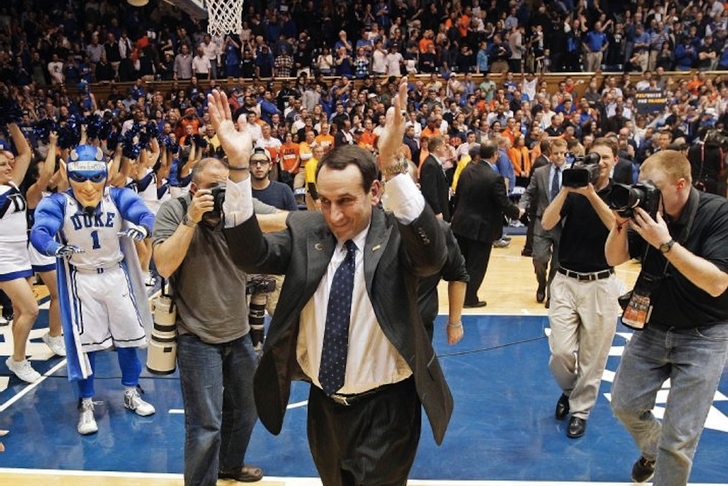 Survive and move on was essentially Duke's motto this week. With three games in five days, including two big ones against UNC and Syracuse, the Devils were just going to have to do all they could to get through the week.

The stretch started with a Tuesday night game against Georgia Tech, where Coach K's squad just came out and took care of business in the 68-51 win.

Two days later, Duke had to drive the eight miles along Tobacco Road to Chapel Hill to face the Tar Heels after the game was postponed one week due to inclement weather. The Blue Devils came out strong and were in control of the game, but got complacent and fell apart late, losing 74-66.

Many people questioned how Duke would respond to the emotionally draining loss with top-ranked Syracuse coming to Cameron on Saturday, just two days after the UNC game. The Devils came out a little sloppy, but scrapped their way back into it. They held the lead for most of the second half, but weren't able to put the game away until Jim Boeheim went berserk over a block/charge call in the last 10 seconds.

Coming out of this week with a 2-1 mark isn't bad at all, especially with a win over the #1 team in the country included (although it didn't feel like it after 'Cuse lost to Boston College).

Jabari Parker continued his strong play with double-doubles in the two victories, and Marshall Plumlee emerged as a force who can provide solid minutes off the bench for Coach K, giving Duke the legitimate rim protector they've been missing.

However, the rest of the team played very inconsistently.

The Blue Devils began the week ranking first in the country in offensive efficiency, but failed to score 70 points in any of their games this week, stretching that streak to four dating back to the Maryland game last weekend.

Now, Duke was on cruise control against Georgia Tech and was resting players for games later in the week, so I won't count that game.

But Syracuse and UNC each played zone against the Devils (the Orange for the whole game, Carolina for the decisive second half) and forced Duke to take a lot of jump shots.

This may seem counterproductive against a team like Duke that shoots the ball so well, but I think it actually worked in slowing the Blue Devils down.

Could some of the problems Duke had offensively be fatigued based? Absolutely. In both games (particularly against Carolina), they had shooters who just missing open jumpers they almost always knock down.

However, the bigger issue is that those zones made Duke's offense complacent. They weren't always aggressive and didn't always attack the rim, instead choosing to settle for passing the ball around the perimeter until someone shot it.

It's a problem that's easy for Duke to fall into because of how well they can shoot the ball, but they're at their best when their perimeter players are attacking the rim and collapsing the defense, either drawing fouls, getting easy layups, or kicking the ball out for more open shots.

They need to get back to being aggressive on offense, because that's when this team is at its most dangerous.

And when the Blue Devils is at their most dangerous, they're one of the elite teams in the country.