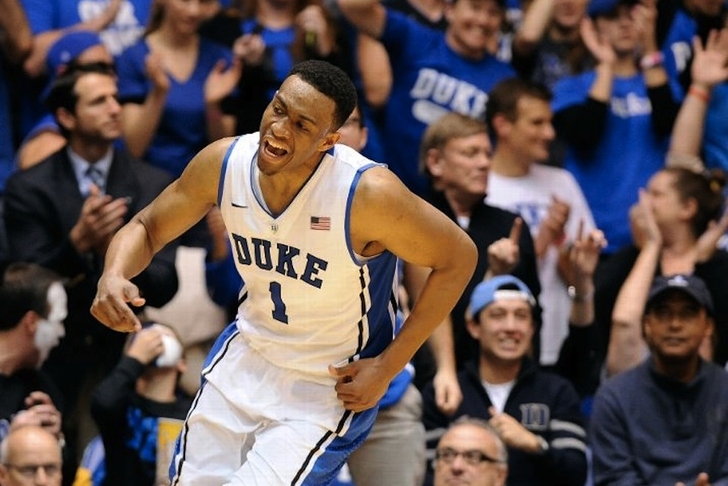 There really isn't much to say about the Blue Devils other than the fact that they took care of business this week.

Following their loss to Syracuse, Duke rebounded at home against a struggling Wake Forest team looking for a signature win. Unfortunately for them, that wasn't going to happen.

After a slow start, the Devils managed to get up and down the court and control the tempo, cruising to a 20-point victory.

Jabari Parker broke out of his ACC slump to record 21 points on 8-10 shooting to go along with eight rebounds. Andre Dawkins provided a spark off the bench with 17 points, and Rasheed Sulaimon chipped in 19 to help pace the Devils.

Up next was a battle against a painfully struggling Boston College team on Saturday, but the Eagles managed to hang with Duke for a half, trailing by just four at the break.

Then Parker decided he was going to take over the game.

He scored 14 points in the first nine minutes of the second half as Duke went on a run that broke the game open, finishing with a 89-68 victory.

Parker recorded career highs of 29 points and 16 rebounds as he played the best game of his college career, while point guard Quinn Cook — who came off the bench in both games this week — broke out of his recent slump with 21 points, including 5-7 shooting from long range.

These two players could not have turned it around at a better time, as rival UNC sits on the horizon.

The Blue Devils will travel to Chapel Hill on Wednesday, and the Tar Heels are looking to prove that they are back after really struggling at the start of ACC play.

While Duke is still playing extremely well, they still took someting of a step back this week. Both games were against largely inferior competition, yet both teams were still close at halftime.

With the talent discrepancy that existed in each of those contests, the Devils should have blown each of them out of the water in the first half.

In the end, both games finished in blowouts and Duke managed to turn it up after halftime, so it may look like nothing. And if this trend of slow starts continues, the team will likely be alright for most of its remaining games.

However, it will come back to haunt them against the higher quality teams they will face later in March.

This problem may have been caused by a lack of focus because Coach K's squad knew they could and would blow these guys out, which is both human and understandable. However, they need to come out with fire from the opening tip, and won't always have time to wait around before waking up and putting a team away.

The one positive to come from that is how Duke was able to put the Deacons and Eagles away in a blink of an eye, turning games around in no time. The basketball term for such actions is "spurtability", something all great teams must possess.

It allows you to make a game close when you've been struggling (see Duke at Syracuse), and it allows you to break games open in a hurry (see Duke at Pitt, vs Wake, at BC, etc.). It keeps games exciting because as a fan, coach, or player, you know your team is never out of it and can change a game in a hurry, which becomes especially important in March when teams don't have much room for error.

So while Duke was fine this week, and will likely be fine for the rest of the regular season, their play raised both a red flag and showed promise for the postseason.