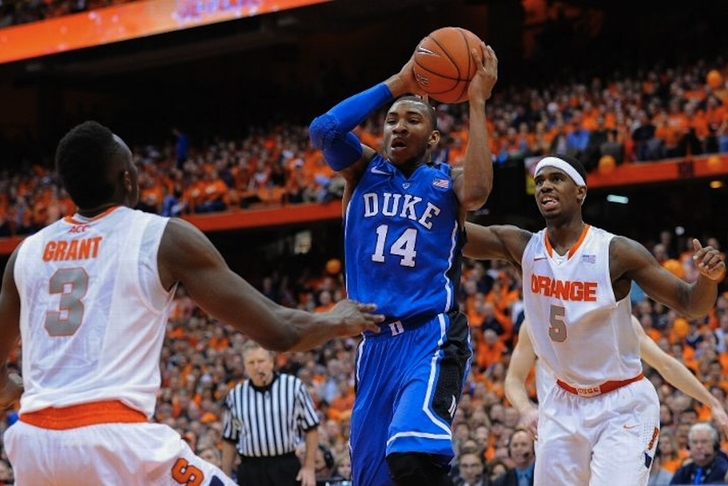 Duke lost for the first time in three weeks on Saturday, yet they're in the best position they've been in this season.

They opened up their toughest week of the season Monday night at Pittsburgh, who's only conference loss had come in a 5-point defeat at Syracuse. The potential for the upset was there - the Panthers play a contrasting style to the Blue Devils, trying to pound it down low and out-physical you.

But the best player on the floor (Jabari Parker) kept the game close while the rest of the Devils struggled, and all it took was a quick run sparked by a few Andre Dawkins threes to break the game open.

Duke ended up with the impressive 80-65 victory, setting the stage for the showdown college basketball fans had been looking forward to since the schedule was released - Syracuse.

Somehow, someway, the game lived up to and even exceeded expectations.

The Orange came into the game undefeated and played like it, controlling the game at both ends of the floor. Unfortunately for them, Duke stayed right with Syracuse, challenging them at every turn.

Even when it seemed that Jim Boeheim's squad was poised to seal the game, the Blue Devils fought back, thanks to a few threes from Tyler Thornton, perhaps the most unlikeliest of heroes.

Duke fought back from the dead again when Rasheed Sulaimon drained a three as time expired to force overtime.

Their long range shooting kept them close in the extra frame, but the Devils fell 91-89.

Despite the loss, Duke proved they are one of the best teams in the country and can beat anyone on any given night.

With Arizona's loss to Cal on Saturday night, Syracuse will take over the #1 spot in country and are still without a loss - Wichita State is the only other team that can claim that.

So, Syracuse is very good. Very, very good. And Duke went toe-to-toe with them for 45 minutes.

In the Carrier Dome.

Shorthanded due to Parker and Amile Jefferson fouling out, which led to Syracuse being able to do anything they wanted inside offensively.

And the Orange shot over 57% for the game, largely due to Duke's defensive problems caused by foul trouble.

Basically, a lot of things went wrong for Duke, and if it wasn't for a Rodney Hood missed dunk (where he may or may not have gotten fouled) at the end of overtime, the Blue Devils would've won.

They're playing their best basketball of the season, and have a pretty easy stretch of schedule the rest of the way.

Jefferson played his best two games of the season this week against two of the top front lines in the country, finishing with 14 points and 10 rebounds against Pitt before posting 14, seven, and five assists against the Orange. His play in the post, especially on the offensive glass, gave Duke more opportunities to convert offensively.

They still have to play Syracuse again on February 22, but that games in Durham. And, of course, the two games against UNC in which anything can happen, but the Blue Devils will be heavy favorites in those games. Other than that, the best team they'll play is Wake Forest.

Things are looking good for the Blue Devils, as long as they maintain this level of focus and intensity.