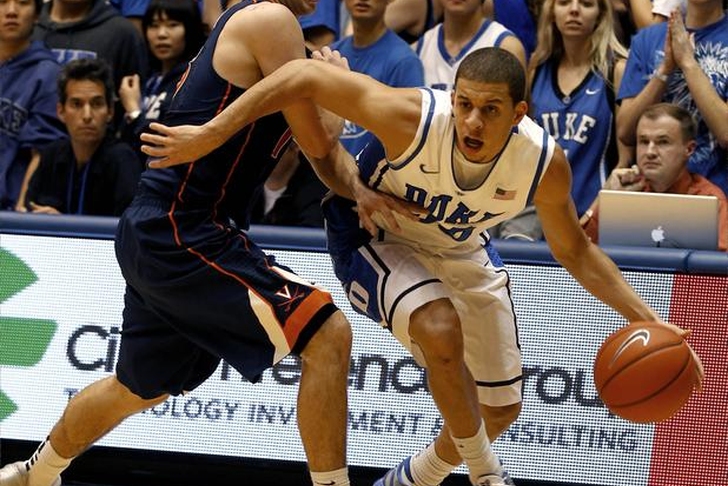 The Duke Blue Devils utilized a strong defensive second half performance on Thursday night against Virginia to hang on 61-58 for their second consecutive victory and extend the nation’s 2nd longest home win streak to 44 (Kentucky: 45).

Coming off of their first win in conference play last week against Georgia Tech in Atlanta, the sixth-ranked Blue Devils (14-2, 2-0) expected a tougher matchup against the 17th ranked Cavaliers of Virginia (14-2, 1-1) who would be visiting Cameron Indoor Stadium riding a 12 game win streak and undefeated in ACC play.

The Cavaliers time to prove their worthiness had arrived, but had considerably large boundaries to cross.  To start, Virginia hasn’t beaten Duke at home since 1995, which equals out to, now, 15 straight losses.  Their latest victory over Duke came back in 2007.

The veteran starting lineup of Virginia posed an advantage to Duke’s mixture of maturity and looked to play a superior defensive game to slow down the Blue Devils 11th ranked scoring offense, which produces about 81 points per game.  Entering the game, the Cavaliers defense allowed just 50.5 points per game and held opponents to a mere 38 percent shooting.

Duke on the other hand entered the game ranked second-to-last in the ACC in scoring defense, allowing almost 70 points per game, while also sitting at the bottom in field goal percentage at 44.3 percent.

The Blue Devils faced a similar scenario back on January 4 where they faced a defensive-minded Temple squad and were upset in Philadelphia as the third-ranked team in the nation.  Despite the facts, it was Duke who ultimately played the best defense and came out victorious.

The Blue Devils shut down most of Virginia’s attack, holding senior sharpshooter Sammy Zeglinski scoreless.  Duke had their work cut out for them early on with fifth-year forward Mike Scott practically scoring at will with 16 points in the first half, but would hold him in check the following half as he totaled 23 points on the night.

Duke struggled to shoot high percentage shots in the first half, going 0-8 behind the arc until making two in a row to tie the game up with a few minutes left.  Virginia would hit their final seven shots to secure the four-point halftime lead at 32-28.

The second half immediately shifted in Duke’s favor as they focused in on shutting down Scott, while also taking much better shots, as they outscored the Cavaliers 23-10 to start the new half.

The Blue Devils defense proved outstanding by holding Virginia to 29.4 percent shooting in the second half and more importantly, survived two potential game tying 3-pointers with just seconds remaining.  Virginia struggling immensely from 3-point range in the second half, missing all 11 attempts.

Junior Mason Plumlee led Duke scorers with 12 points, while guards Austin Rivers and Seth Curry each added 11.  The Blue Devils shot a solid 52%, despite hitting only 5 of 20 3-pointers and missing 11 of their 19 attempted free throws.

Next, Duke heads to Clemson on January 15 at 6:00pm EST for another crucial ACC matchup.