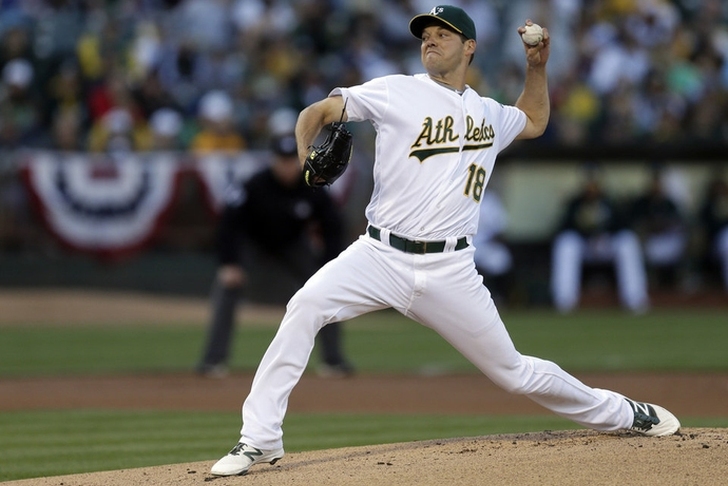 The MLB trade deadline on July 31st is rapidly approaching, and the trade rumors around the Detroit Tigers are starting to heat up. The Tigers are 45-44, but only a few games back of a Wild Card berth - meaning they could decide to be either sellers or buyers as the deadline gets closer. With that in mind, here all the latest Tigers trade rumors:

Tigers targeting Rich Hill?
Detroit is looking to upgrade their pitching staff at the deadline, and one player that figures to be available that they've been targeting is Oakland's Rich Hill, according to Jeff Todd of MLB Trade Rumors:

Hill has returned from the DL to rave reviews for the Athletics, and both Drellich and Susan Slusser of the San Francisco Chronicle suggest that widespread interest is building in the southpaw. The former cites the Red Sox, Dodgers, Cubs, and Tigers as organizations that are taking a look at Hill. And Slusser adds yet more teams to the possible mix, listing the Blue Jays, Royals, and Orioles as possible suitors that have been watching him pitch of late. While Hill’s frequent injuries limit his appeal somewhat, there’s an argument to be made that he’s the best pure rental piece available this summer.

Detroit looking to add another bat?
There's no doubting that pitching is Detroit's biggest need, but could they actually improve by adding another bat instead? SB Nation's Rob Rogacki explains why the Tigers may benefit from doubling down on offense at the deadline:

It seems backwards, but the pitching-starved Tigers could improve their roster not by adding a starter, but by doubling down on their offense at the trade deadline and adding a bat. Runs are runs, and the only object in baseball is to score more of them than the other team.

This is an idea that FanGraphs’ Dave Cameron explored earlier this week. Cameron argued that the Boston Red Sox could dig into their considerable farm depth and trade for an upgrade at catcher, such as Milwaukee’s Jonathan Lucroy, one of the most talented players on this year’s trade market (presumably). Cameron postulates that boosting a good offense with an above average hitter actually has a bigger effect than adding said hitter to a bad team.

Another factor backing up that idea is the lack of high-quality pitchers the figure to be available before the deadline. Hill and Atlanta's Julio Teheran are the top two arms that should be available.

Follow our Detroit Tigers news page for all the latest Tigers trade rumors!