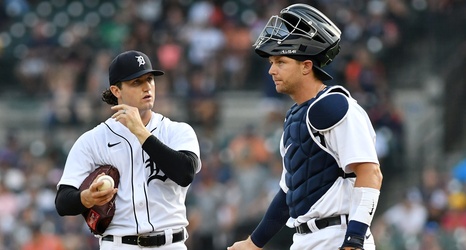 Detroit — Somebody had to go.

With catcher Eric Haase returning off the injured list on Friday, the Tigers had a choice of either designating veteran Dustin Garneau for assignment or optioning Grayson Greiner.

They chose the latter.

Greiner, who played arguably one of the best games of his career in the Tigers’ 4-3 win in St. Louis Tuesday night, was optioned back to Triple-A Toledo on Thursday.

Greiner, who won the backup catcher job in spring training, walked three times on Tuesday. He threw out Paul DeJong trying to steal and he blocked three balls in the dirt, one with a runner at third base.