Tigers offense dries up after rain delay in loss to Indians 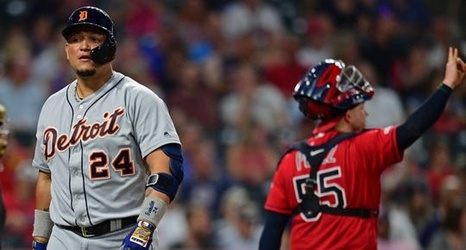 Cleveland — The Tigers continue to score runs — a little-used sentence this season.

They have produced five or more runs in eight of their last 10 games. They followed their season-high, 12-run output Sunday in Kansas City by hitting four home runs Monday against the Indians.

Two of those home runs were struck by Jordy Mercer, who had but one entering the game.

Not that that power surge was sufficient, mind you. The Indians came out of a 54-minute rain delay and scored three runs in the bottom of the seventh inning — all off reliever Victor Alcantara — and beat the Tigers for the eighth straight time this season, 8-6.