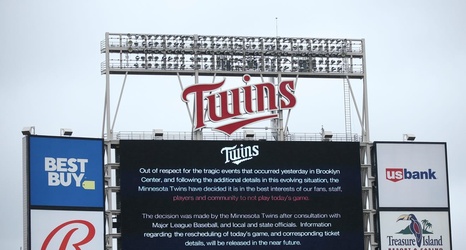 Minneapolis — The Minnesota Twins postponed their game against the Boston Red Sox on Monday because of safety concerns following the fatal police shooting of a Black man and the potential for unrest in the area.

The Red Sox and Twins were scheduled to begin a four-game series Monday afternoon at Target Field. The Twins said their decision was made in consultation with Major League Baseball and state and local officials. There was no word yet about rescheduling or the status of games set for Tuesday, Wednesday and Thursday.

The shooting of 20-year-old Daunte Wright occurred Sunday after a traffic stop in Brooklyn Center, a suburb adjacent to Minneapolis.