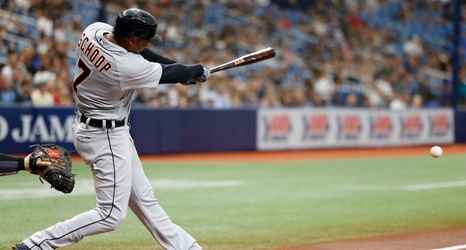 ST. PETERSBURG, Fla. — One day after the Detroit Tigers collapsed in the ninth inning and were beaten in the 10th by a three-run walk-off home run, Jeimer Candelario delivered a bomb of his own, launching a two-out, three-run homer to center in the first inning of Saturday's showdown against the American League's best.

Candelario's sixth home run in his past 16 games — giving him 16 this season to go with an MLB-leading 40 doubles — gifted the Tigers an early advantage in a 4-3 victory over the Tampa Bay Rays at Tropicana Field.