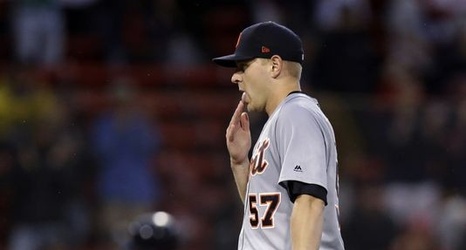 Boston — It was J.D. Martinez’s first game against the Tigers since they traded him last July, and he was inflicting pain with every at-bat, helping his Red Sox win the first of a three-game series, 6-0, Tuesday.

In his first at-bat, in the first inning against right-hander Artie Lewicki, he hit a 91-mph fastball 431-feet over the Green Monster in left-center field. It was his major-league best 20th home run of the season and it put the Red Sox up 2-0.

In his second at-bat in the fourth inning, his ground ball — hit with an exit velocity of 104.