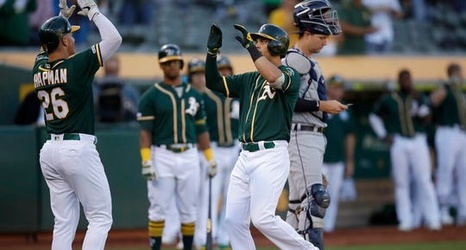 Oakland, Calif. — Even the managers were perplexed by all the quirky details of a game that began nearly four months ago and finished in a different ballpark way out West.

Chad Pinder homered, Mike Fiers earned his fourth victory or his 14th, however you want to look at it, and the Oakland Athletics beat the Detroit Tigers 7-3 on Friday night in a game that was suspended on May 19 because of the weather.

“There were a lot of oddities,” A’s manager Bob Melvin said.

Then, the clubs played another one — and it went extra innings.