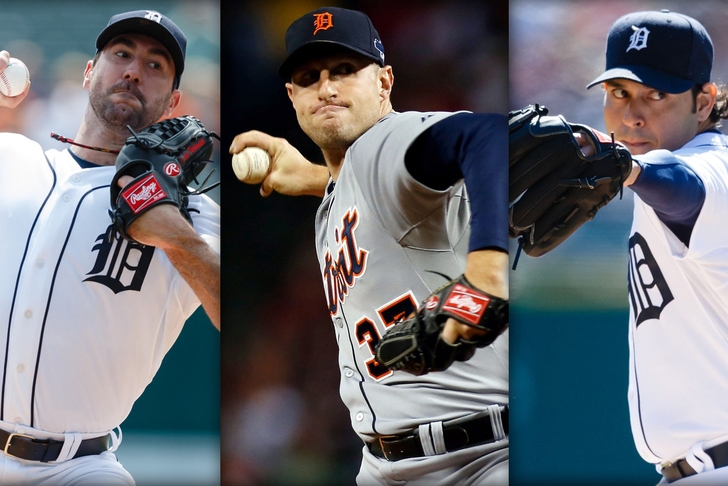 With Detroit Tigers rumors heating up as Spring Training rapidly approaches, the folks over at ESPN believe that the Tigers already have more than enough on their current roster to win the American League pennant.

ESPN.com's David Schoenfield released his power rankings today for the six best teams in Major League Baseball going into the 2014 season, and the Detroit Tigers' starting rotation is all Schoenfield needed to rank the Tigers as the #2 team in baseball--

"There’s no surprise ranking the Tigers here. When you start off with Cabrera, Scherzer, Verlander and Anibal Sanchez you’re in a very good place."

Schoenfield did go on to ponder that it will be "interesting to see how much offense the team loses without Fielder and Peralta," also raising questions about Kinsler's recent production and Torii Hunter's age.

However, the ESPN analyst countered that the Detroit Tigers "have the best hitter in the game" in Miguel Cabrera, along with "three Cy Young candidates" in Anibal Sanchez, Justin Verlander, and Max Scherzer, and that the Tigers "will win their fourth straight AL Central title" and finish at 94-68.

The #1 team in Schoenfield's rankings is the St. Louis Cardinals, indirectly projecting a 2012 World Series rematch between the Cardinals and Tigers.