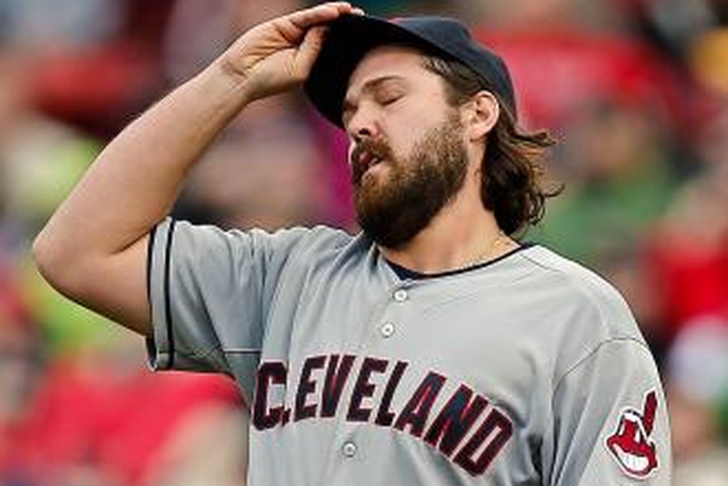 When Chris Perez took the mound for the ninth inning to close out the Detroit Tigers and seal a 2-0 win for the Cleveland Indians, it gave Detroit fans hope. Not only does the shaky caveman-looking righty lose the strike zone on a regular basis, but he also has a bit of a history against the Detroit Tigers.

Exactly one year ago, on August 5th, 2012, Chris Perez entered a game in the 10th inning at Comerica Park with a three-run lead. Usually, when a closer comes into a game up by three runs, finishing the game is just a formality. Closers normally buckle down during save-situations and the Tigers had just given up three runs to put the Indians in line to pick up a much-needed win over their division rivals.

The rest of that inning is history. Perez gave up five runs, highlighted by a walk-off two-run shot by Miguel Cabrera that essentially buried the Indians for the rest of the season. After the game, Perez told reporters that it was the worst outing of his career and the worst he's ever felt on a baseball diamond.

2013's sequel did not disappoint for Tigers fans. Starting pitcher Corey Kluber scattered six hits and the Indians seemed ready to add to their Major League-leading 15 shutouts on the year and get a big win in the first of four meaningful games between the top two teams in the AL Central.

As well as the Indians were pitching, the Tigers looked like they didn't come to play. Miguel Cabrera was walking around the base paths and couldn't cover more than a few feet to either side at third base due to his ailing abdominal. In the fourth inning, the third baseman couldn't get to a Michael Brantley popup that landed just a few feet foul near the third base bag. Brantley would then reach on a single and score on a Carlos Santana double.

Needless to say it seemed like one of those frustrating nights for the Tigers. Anibal Sanchez, who kept his club in it, had great control and struck out 11 batters but the offense just couldn't push any runs across. Austin Jackson even crippled a bases-loaded rally by getting thrown out on a Torii Hunter single when he rounded second base too aggressively.

[caption id="attachment_531" align="alignright" width="300" caption="Alex Avila hit a go-ahead 3-run homer off of Chris Perez in the top of the 9th inning."]

Just like it did that fateful day a year ago, when Perez entered the game, everything went south for the home team. He allowed all four batters he faced to score before being taken out, and Joaquin Benoit shut the Indians down in the bottom of the ninth for a big victory.

The significance of this win lies in the big picture: will this devastating loss haunt the Indians for the rest of the season? When Alex Avila's homerun hit the leftfield seats, the standings took a two-game swing, just as they did last season when Cabrera sent Perez packing. Though the Indians are much closer in this August 5th edition than they were last year, the loss is just as demoralizing.

Terry Francona should be careful with Perez in the remaining games against the Tigers, as they seem to be in his head. Closing games is as much of a mental battle as it is physical, something that was proven by Jose Valverde when he followed up a perfect season with a horrific postseason collapse.

The rest of the series will be crucial for the Indians, as they attempt to bounce back and keep the division lead in their sights. This is their best chance to pick up ground, as Detroit continues to play with an injured Cabrera and without second baseman Omar Infante. Tigers fans just hope that if the team gets down in the late innings, Francona will call for the wild closer to come out of the pen and give hitters a chance.