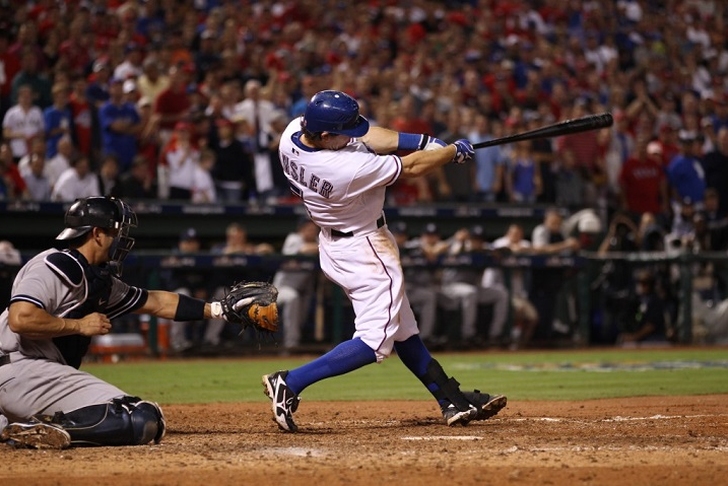 Wednesday evening the Detroit Tigers sent first baseman Prince Fielder and $30 million to the Texas Rangers in exchange for athletic second baseman Ian Kinsler. Though Fielder's 106 RBI and massive power should convert well to Texas' hitter-friendly ballpark, Dave Dombrowski has managed to improve his team for the present and the future once again. Here are five reasons why one of the top General Managers in the country made this move.

For the past four seasons, Detroit has used Austin Jackson as the primary lead-off hitter in a generally slow offensive unit. Though the young center fielder has posted a .278 average and .344 OBP, the Tigers have lacked speed and base running aggressiveness at the top of the order.

In his career Jackson has stolen just 69 bases and been caught 24 times (74.2%). In the past two years, however, he has been much more reluctant to run after long stints on the disabled list and has just 20 stolen bases in 33 attempts (60.6%).

His low percentage has made the risk of erasing a base runner for Miguel Cabrera too high to run very often.

Kinsler, on the other hand, has averaged 21.5 stolen bases over his eight-year career and has an impressive 80.4 percent success rate. Though he stole just 15 bases last year, Kinsler is always a threat on the base paths and gives Detroit more athleticism near the top of the order.

This lineup move would also move Jackson down in the order, where he experienced success in the 2013 postseason. In the lead-off spot, the 26-year old hit an abysmal .091 with 18 strikeouts in 33 at bats, but when Manager Jim Leyland moved Jackson to the eight-slot, he was six for nine (.667) with zero strikeouts in three games. Kinsler's presence at the top of the order could give Jackson a chance to excel in a lower-pressure situation.

2. Detroit has elite defense up the middle

Though players like Miguel Cabrera and Nick Castellanos won't provide many defensive highlights, the Tigers have managed to establish elite defenders up the middle.

The most important defensive positions are catcher, shortstop, second base and center field. With Alex Avila managing a star-studded pitching staff, the Tigers are comfortable behind the plate. Jackson is one of the top outfielders in the MLB, and fails to win gold gloves solely because the jumps he gets when the ball is hit allow him to make catches without jumping or diving.

At the 2013 trade deadline, Dombrowski added the best young defender in baseball in Jose Iglesias, and now he has an athletic Kinsler as a double play mate. Kinsler has a lifetime fielding percentage of .978 and will solidify an important position for the Tigers.

3. Nick Castellanos can return to his original position

Fielder's absence opens up a first base position that will almost definitely welcome back Cabrera. His lack of range at third base left him among the worst defenders statistically in the Major Leagues.

If Cabrera does make the shift, then Detroit's top prospect Nick Castellanos can move back to a third base position that saw him put up monster numbers at every lower minor league level.

Though Castellanos doesn't turn heads with his defense, he is more productive that Cabrera and his bat fits the mold of a power third baseman. The young prospect has the potential to hit .300 with 30 home runs regularly in The Show, and his full potential lies in his playing at the hot corner.

Three quarters of the way through an historic 2013 season, Cabrera's injuries got the better of him. The slugger hit just .278 with two extra-base hits in the month of September and .262 in 11 playoff games.

Detroit needed him in the lineup, but he struggled to get back to even 50% health.

Now, with Castellanos likely taking over at third base, Cabrera can move back to the much-less demanding first base position and focus on swinging the bat. If the Tigers are going to win a World Series with this core group of players, Cabrera needs to be healthy for the postseason.

Playing 162 games at third base would make that much more difficult.

The most significant gain for the Tigers in the Fielder trade was dumping the remaining $168 million on his contract. After subtracting the $30 million the Tigers sent to Arlington, the team will save $138 million over the next seven years.

In other words, trading for Ian Kinsler isn't the last of Detroit's 2013-2014 transactions.

Dombrowski can use the money to extend the contracts of Cy Young winner Max Scherzer and MVP Cabrera. These two players are more important than any of the available free agents or trade candidates, so if the financial freedom allows the GM to resign these stars, it's much better than a blockbuster trade.

In the short term, Prince Fielder's absence may hurt the Tigers' offense as Cabrera readjusts to life without his protection. Detroit always has eyes on the future, though, and this move gives the organization much more flexibility to improve from within.