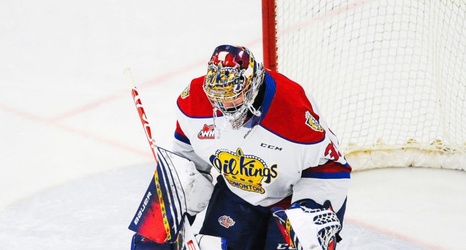 CALGARY, AB - MARCH 27: Sebastian Cossa #33 of the Edmonton Oil Kings in action against the Calgary Hitmen during a WHL game at Seven Chiefs Sportsplex on March 27, 2021 in Calgary, Alberta, Canada. (Photo by Derek Leung/Getty Images)

Most conversations about drafting a goaltender early in the 2021 NHL Draft focus on the consensus top prospect, Jesper Wallstedt. But there’s another top-end prospect vying for a first round pick: Sebastian Cossa.

Cossa has played in the WHL the last two seasons. He started in crease for one of the league’s best teams, the Edmonton Oil Kings.