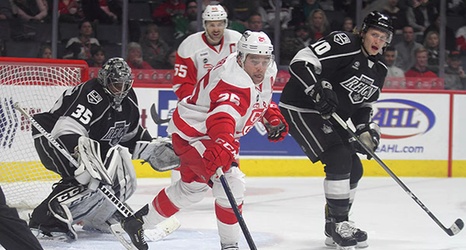 GRAND RAPIDS, Mich. – Eric Tangradi scored in his return to the Grand Rapids Griffins after signing a one-year contract 90 minutes before the opening faceoff, but the Rockford IceHogs rallied for a 2-1 shootout victory on Friday at Van Andel Arena.

Tangradi, a member of Grand Rapids’ 2017 Calder Cup championship team who began this season by playing for Astana Barys of the Kontinental Hockey League, helped ensure that the Griffins’ six-game losing streak in regulation came to an end by scoring his 77th career goal as a Griffin early in the second period. But the goaltending duel between Calvin Pickard and Collin Delia was decided in Rockford’s favor when the IceHogs prevailed 2-0 in the skills competition.