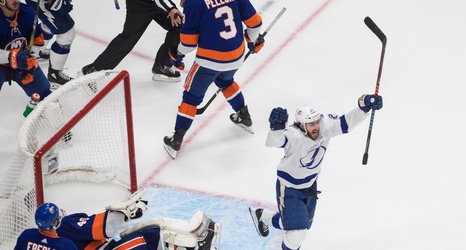 Edmonton, Alberta — While the New York Islanders were celebrating Brock Nelson scoring the first goal of the game, Tampa Bay Lightning center Yanni Gourde was steaming about giving it up. Coach Jon Cooper decided to keep him on the ice for some redemption.

“I’m not really happy out there after that goal,” Gourde said. “I’m like, ’Let’s go back out there and try to have an O-zone shift where we can actually get momentum back.’”

They did more than that. Gourde set up Blake Coleman to tie it 15 seconds after Nelson’s goal, Ondrej Palat added another 12 seconds later and the quick-strike Lightning moved within a victory of the Stanley Cup Final with a 4-1 victory Sunday in Game 4 of the Eastern Conference Final.