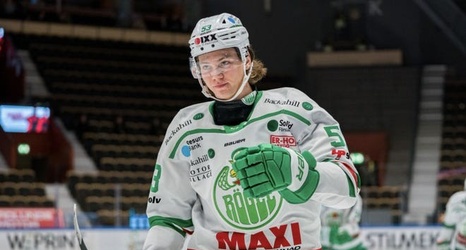 Red Wings prospect Moritz Seider scored his first goal of the season for Rogle in the Swedish Hockey League on Saturday.

Seider, a 6'4", 205-pound defenseman who scored two goals in 49 games with the Grand Rapids Griffins in the American Hockey League last year and two goals in 43 games with Mannheim in the Germany's Deutsche Eishockey Liga two years ago, has one goal and three assists in four games since transferring from Mannheim this year.

Seider, the sixth overall pick in the 2019 NHL draft, had the opening goal in a 5-4 victory over Skelleftea, improving Rogle's record to 7-2-0 record for 22 points.