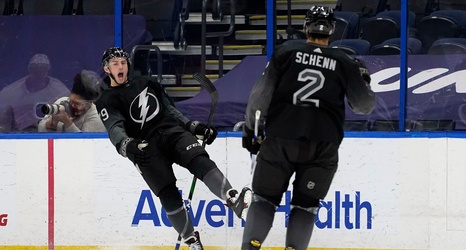 Tampa gave itself a cushion, then skated to a 2-1 victory over the Red Wings.

Adam Erne continued his breakthrough season with a career-high eighth goal at the 4 minute mark of the third period, cutting Tampa’s lead to 2-1.

But the Wings couldn't get another past Vasilevskiy, the likely Vezina Trophy winner this season, who was tough in the late stages of the game.

Tampa’s Ross Colton and Brayden Point scored 3:19 apart in the first period, but it was Vasilevskiy who starred against the Wings with 24 saves including numerous big stops late to preserve the lead.