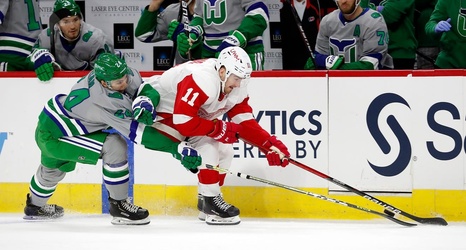 As it turned out the Red Wings had enough players Saturday to face the powerful Carolina Hurricanes, never mind all the rumors swirling around the trade deadline.

And, yes, the Wings responded well after being embarrassed Thursday against Nashville.

And they still had Adam Erne.

The red-hot Erne scored a third-period goal, then scored the tie-breaker in the shootout, as the Wings defeated Carolina, 5-4.

Erne and Dylan Larkin scored in the shootout, as the Wings won the eight-round shootout, 2-1.

Erne, who continued his unexpected breakthrough offensive season with his 10th goal, gave the Wings a 4-3 lead.