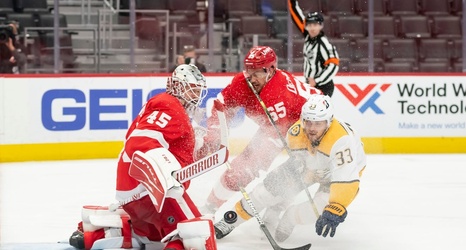 Detroit — The Red Wings have played better for several weeks now, since being routed in Nashville on March 25, exactly two weeks ago.

The Wings had looked better defensively and didn't have many bad stretches within the game.

But Thursday at Little Caesars Arena, the Predators routed the Wings again.

All the Wings' bad habits resurfaced again Thursday in a game that gradually turned into a rout — a 7-1 Nashville victory, the identical score as the March 25 rout in Nashville.

Defensive breakdowns, leaving too many Nashville players in prime positions to score, and not enough offense led to the Wings' undoing.