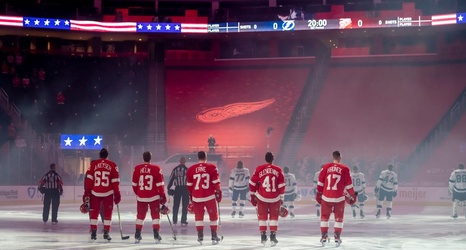 Detroit — Some athletes you just cannot picture in another uniform but the one they’ve worn their entire career.

Luke Glendening, if not at that point yet, is pretty close. Really, can any Red Wings fan truly envision Glendening wearing another hockey sweater?

Glendening has spent eight seasons with the Wings after signing out of Michigan as an undrafted free agent and spending time with the Grand Rapids Griffins, Detroit's minor league affiliate.

The East Grand Rapids native has been affiliated with the state, or the Wings, his entire hockey career.

“Growing up a Red Wings fan and then being able to be here my whole career so far is a dream come true,” Glendening said.