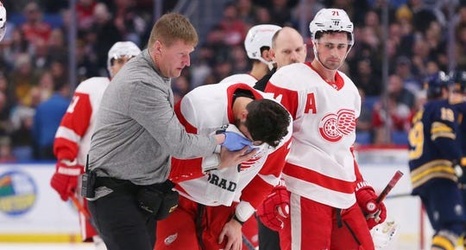 BOSTON — His mom wanted to know when he’d back on the ice. The answer was three days.

Detroit Red Wings forward Brendan Perlini joined his teammates for Friday’s practice at TD Garden, foraying onto the ice in a full face shield. Perlini doesn’t know when he’ll be cleared to play, but right now he’s just relieved he’s able to joke about how scary he looks after being gashed in the face during Tuesday's game at Buffalo.