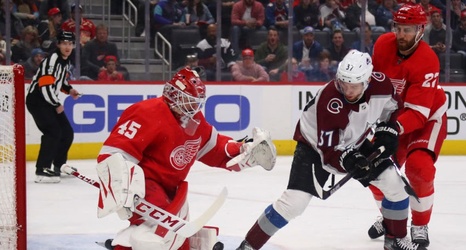 DETROIT, MICHIGAN - MARCH 02: Jonathan Bernier #45 of the Detroit Red Wings makes a stop on a shot by J.T. Compher #37 of the Colorado Avalanche during the first period at Little Caesars Arena on March 02, 2020 in Detroit, Michigan. (Photo by Gregory Shamus/Getty Images)

Bernier wasn’t supposed to be in that situation.

Most NHL insiders assumed him to be part of GM Steve Yzerman’s master rebuild strategy – the Yzerplan – and en route to the airport Monday night after being traded for additional assets.