5 things you may not remember about Detroit Red Wings' 1997 fight with Claude Lemieux, Avs 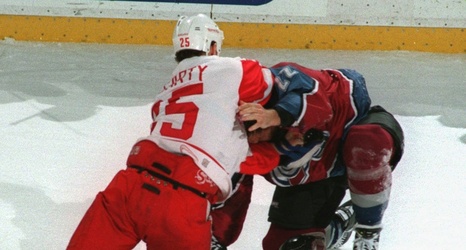 Critics said they lacked the toughness to win the Stanley Cup, even though they resided atop the NHL standings for much of the decade.

That night represented more than just revenge on Claude Lemieux of the Colorado Avalanche. It was more than just drawing blood to avenge the facial injuries Kris Draper dealt by Lemieux in the 1996 Western Conference finals.

It was a chance to show the hockey world — and even themselves — they weren't going to be pushovers.

And one could argue that the Wings got the Stanley Cup monkey off their backs, not in early June, but on this late March night at Joe Louis Arena.