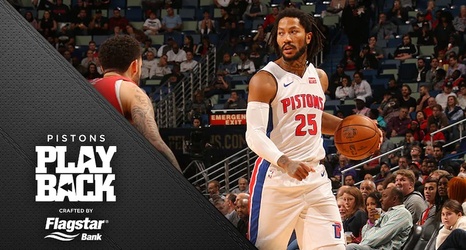 ANOTHER ROSE WINNER – Take this set of facts: At halftime, the Pistons were shooting 33 percent, had committed 14 turnovers and got a total of 15 points from their starting lineup. Then guess what their deficit was. Twenty? Thirty? Nope. Six. That gave them a chance to recover from a sloppy first half and they seized the opportunity – nobody more assertively than Derrick Rose. Rose scored 17 of his 21 points in the fourth quarter, including the game winner with three-tenths of a second to play when he took Jrue Holiday into the paint, stepped back and drained a 10-footer for the win – the second straight game in which Rose hit the game-winning shot on the final possession.