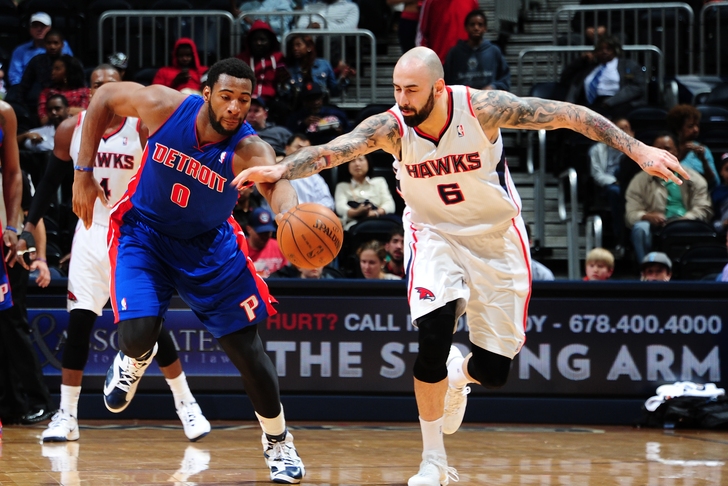 The Detroit Pistons (3-9) are attempting to blow past a frustrating start to the 2014-15 NBA season, as they attempt to avoid a fourth-straight defeat in Friday's road contest against the Atlanta Hawks (5-5).

The Hawks lost their first home game of the season on Tuesday, 114-109 to the Los Angeles Lakers, and are currently on a mini two-game losing streak after winning four in a row.

The Detroit Pistons have relied on a ton of iso looks so far during the 2014-15 season, coming into Friday's game against the Atlanta Hawks 29th in the NBA with 18.3 assists per game. The Pistons have played like a fragmented team full of cold jump shooters and limited spacing in the post, and it has cost them dearly scoring-wise. They sit just 27th in the league at 92.4 points per game, and need to find some cohesion on offense quickly before the season fully gets away.

A healthy DeMarre Carroll opens up the floor for Atlanta

Forward DeMarre Carroll is expected back on the floor for the Hawks on Friday after missing the past four games with a strained groin. If he indeed is healthy enough to go, the Hawks will be ecstatic to have his scoring (12.0 ppg) and perimeter work (second on the team with 1.8 made threes per contest) back in the lineup. Adding another sharpshooter at the arc will only serve to give Millsap and Horford more open looks in the block when Detroit's defenders rotate out to help.

The Detroit Pistons are kind of mess right now, with both lineup problems and visible frustrations beginning to surface. The Atlanta Hawks will be hungry to get off the snide on Friday, and with a healthy Carroll back in the lineup, should have plenty of firepower to win this one going away.