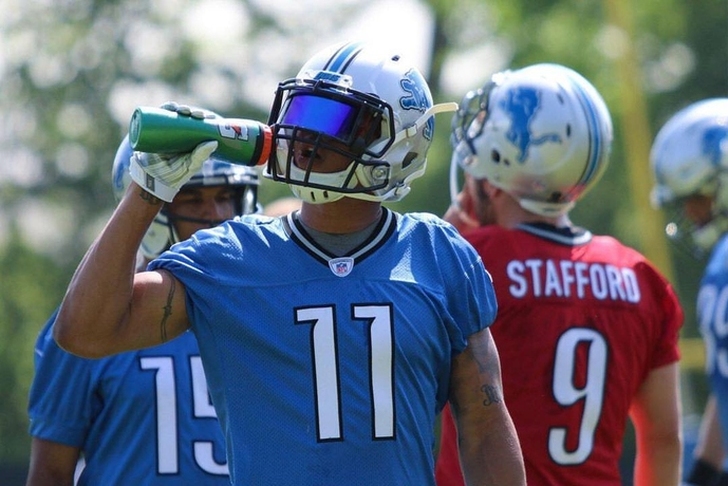 The Injuries
Injuries are an unfortunate reality of the NFL and the Lions haven't been immune to them. LB Jon Bostic could miss serious time with a leg injury, hurting a LB corps that was already thin. He had to be carted off the field. CB Darius Slay missed practice yesterday, although his issue appears to be minor. The real injury question surrounds TE Eric Ebron, who appears to have suffered an ankle sprain. The Lions are being quiet about how long Ebron will be out, but he has been walking around at practice with no boot, so that's a good sign. With Calvin Johnson gone (more on that below) and Brandon Pettigrew still out, the Lions need Ebron to look like the Top 10 pick they made him.

Offensive Line Getting Better
Early in training camp, the Lions offensive line struggled in a noticeable way. But, the unit is steadily improving. Riley Reiff is a much better fit at right tackle, although Taylor Decker could struggle the way main rookies do at left tackle. Larry Warford is playing well at one guard spot, but guard Laken Tomlinson and center Travis Swanson have been inconsistent. The presence of Geoff Schwartz as a veteran backup is key. If the offensive line continues to improve, the Lions' offense, especially the running game, will benefit. If not, RB Ameer Abdullah (who has looked good in camp) could struggle again.

Marvin Jones The No. 1 WR?
With Johnson gone, the Lions have plenty of targets to give to other wide outs. While Golden Tate was expected to be the No. 1 WR, it's free agent addition Marvin Jones who has actually looked like the top weapon. Signed from the Bengals this offseason, Jones is bigger than Tate and is quickly developing chemistry with QB Matt Stafford. With Tate battling drops, Stafford could look at Jones even more this season.

Don Carey Looks Sharp
Carey, who started the preseason on PUP list, is looking sharp now. He picked off two passes in practice earlier this week and that could help him in his battle for a roster spot. Carey does face an uphill battle to make the roster, with Glover Quin and Rafael Bush locked in as the starters. Plus, Tavon Wilson is the clear-cut No. 3 safety and fourth rounder Miles Killebrew will have a roster spot. Still, strong play is a positive for both Carey and Detroit.

Follow our Detroit Lions team page for all the latest Lions training camp news or download the Chat Sports App!