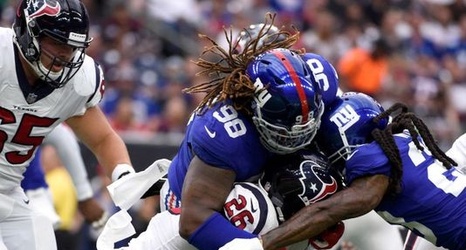 The Detroit Lions have acquired 6-foot-3, 350-pound defensive tackle Damon Harrison from the New York Giants for a fifth-round draft pick in 2019, according to an ESPN report.

Harrison was signed by the New York Jets in 2012 after going undrafted out of William Penn. He signed with the Giants as a free agent ahead of the 2016 season for five years and $46.25 million.

Harrison's contract runs through the 2020 season and he has a base salary this year of $7.75 million.

Harrison, whose nickname is "Snacks," has 386 tackles over the last six seasons, including 31 this season.