Detroit Lions: Exploring the options for the 2020 punter vacancy 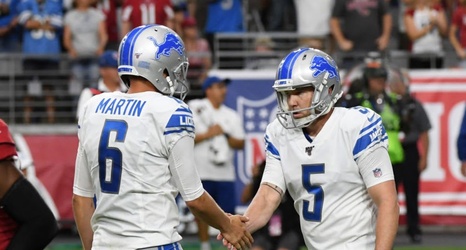 GLENDALE, ARIZONA - SEPTEMBER 08: Matt Prater #5 of the Detroit Lions celebrates with Sam Martin #6 after kicking the game tying field goal during overtime against the Arizona Cardinals at State Farm Stadium on September 08, 2019 in Glendale, Arizona. The game ended in a 27-27 tie. (Photo by Norm Hall/Getty Images)

The Detroit Lions allowed Sam Martin to leave, opening a competition for the punter job.

Following another disappointing season from punter Sam Martin, the Detroit Lions made the decision to not retain his services this offseason. Instead, Martin went on to sign with the Denver Broncos and will be taking his services to Mile High Stadium.