Raiders vs. Lions: Notes, Quotes And Observations From Detroit's 18-13 Win 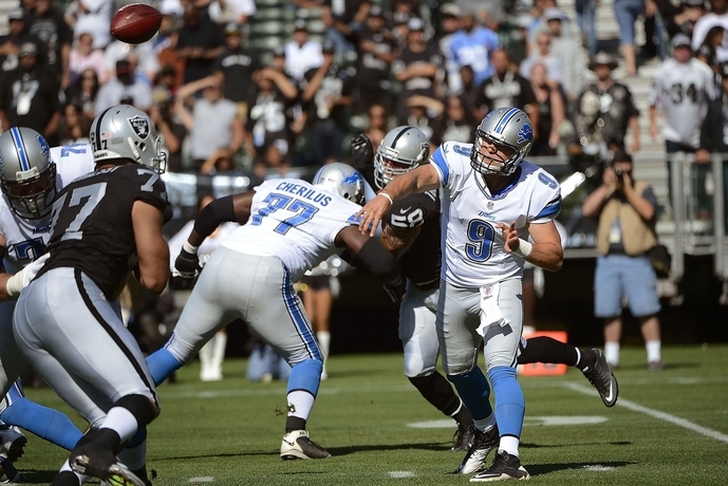 The Detroit Lions (3-7) have won consecutive games for the first time all year, upending the visiting Oakland Raiders (4-6) by an 18-13 count on Sunday on the strength of a early fourth-quarter touchdown run by quarterback Matthew Stafford. Here are some notes, quotes and observations from Detroit's big win.

Detroit's running game wasn't exactly explosive (31 carries, 109 yards, 1 TD), but it may have been the key to the team's victory on Sunday. The Lions are 3-0 when they rush the ball 20 times or more this season.

The Oakland Raiders had a top-ten offense through the team's first eight games, but they've fallen off considerably in the past two weeks. Oakland mustered just 214 total yards of offense on Sunday, including just 50 rushing yards on 21 carries.

Oakland nearly fumbled the game away on Sunday, putting the ball on the ground three times. They recovered all three, but the team's struggles holding onto the rock were symbolic of the way the team's offense struggled all day.

"He had some timely runs. And, that was a good decision on the touchdown because he had a couple other options there. I think teams underestimate how quick he is." -- Lions coach Jim Caldwell on Matthew Stafford.

"For him to come out of a game with one catch, we've got to do a better job there." -- Raiders coach Jack Del Rio on Amari Cooper's one-catch performance

"It's a great feeling for the offensive line when everyone, including the Raiders, knew we were going to run and we were still able to do it." -- Lions offensive tackle Riley Reiff

"Just a little off in some of those situations." -- Jack Del Rio on the team's two delay of game penalties.

Oakland had the makings of a dream season going after seven games, posting a 4-3 record and looking poised on both sides of the ball for a playoff run. However, the Raiders have lost a season-worst three straight since and have been unable to find continuity on either side of the ball in order to reverse the bad mojo. The Raiders are still very young and may be ahead of schedule at 4-6 (and still in the Wild Card race), but that's not going to make Jack Del Rio's crew feel any better about three weeks of missed opportunities.

Detroit has suddently morphed into a dangerous team after a first half of the season marred by blowout losses and awful defense. Riding their first winning streak of the season, Detroit remains squarely outside of the playoff picture. But, these past two games have reinforced the notion that this team is talented enough to compete at a high level. If they can keep running the ball and smothering opposing teams with solid front-seven play, the winning streak could continue.