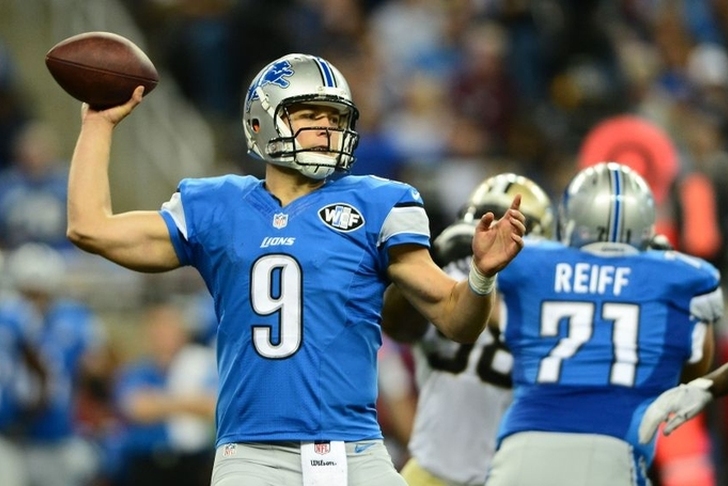 The New Orleans Saints tried to mount a late rally, but the Detroit Lions held on for a 35-20 win Monday Night. The Lions took a 28-3 lead early in the third quarter, before the Saints started to chip into the lead.

It was 28-20 with 10 minutes to play in the fourth quarter, but the Lions went on scoring drive that lasted nearly five minutes to put the game out of reach. The Saints added another score after the two minute warning, but couldn't get the onside kick. The Lions gave the Saints a shot after Matt Prater shanked a chip shot field goal with 14 seconds left, but Brees wasn't able to produce a miracle.

Matt Stafford had a wonderful day against a poor Saints' secondary. He completed 22 of 25 passes for 254 yards and three TDs. He did so despite targeting Calvin Johnson just once. Johnson caught that pass for 19 yards.

The Lions' normally poor running game also had success. The team ran for 150 yards and two scores on 23 carries. Ameer Abdullah led the way with nine carries for 77 yards and a score. Joique Bell wasn't far behind with eight carries for 71 yards and a TD.

Drew Brees became the first QB in NFL history to throw for 4,000 yards in 10 straight seasons during the game. He was hobbled during the contest, as he battled an ankle injury he suffered early in the game. He finished the game with 34 of 52 passing for 341 yards and three TDs.

His top target was Brandin Cooks, who caught 10 passes for 124 yards and a TD. The running game didn't do much for the Saints, as they were forced to throw it often because of the deficit. The team had just 18 carries for 69 yards, 11 of which came from a Brees run.

The Saints and Lions are now both 5-9. The Lions host the 49ers in their final home game of the regular season Sunday. The Saints host the Jaguars.