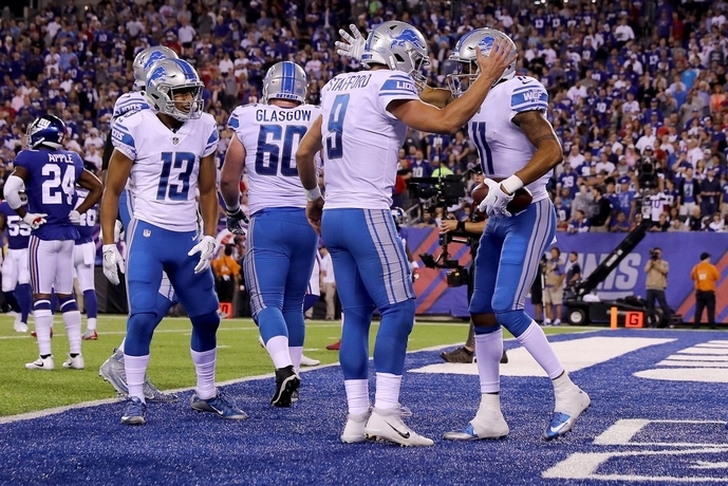 The Detroit Lions have started their season exactly like they wanted, but the same can't be said of the New York Giants. With a 24-10 win Monday night, the Lions improved to 2-0, while the Giants are 0-2. Check out highlights, stats and more from the Lions' win.

The Lions struck first, with Matthew Stafford finding Marvin Jones for a score. That 27-yard score was Jones' only catch of the night.

Touchdown #Lions! Matt Stafford finds Marvin Jones (@MarvinJonesJr) for the score to the put the Lions up! #OnePride #DETvsNYG pic.twitter.com/hb2rWaaVQa

The Giants had Odell Beckham back after he missed week 1, but he didn't put up the type of numbers he's accustomed to. He was limited to just four catches for 36 yards. .

The first catch of the year for @OBJ_3, who is playing through his ankle injury. #GiantsPride #DETvsNYG pic.twitter.com/ziBnX3DkNV

After entering the second quarter down 7-0, Eli Manning found Evan Engram for the game-tying score.

The #NYGiants respond! Eli Manning finds @EvanEngram for the score to tie it at 7! It's Engrams's first career TD catch! #GiantsPride pic.twitter.com/Bo1ebsDPfx

But the Lions would take the lead back, as Matthew Stafford found Eric Ebron for the score. Ebron finished the game as the Lions' leading WR.

Just before the half, the Lions extended their lead with a bouncing Matt Prater field goal.

Off the upright and ... GOOD! Matt Prater (@MattPrater_5) bounces in a 56-yard FG to make it 17-7 #Lions over the #NYGiants! #OnePride pic.twitter.com/e1TUOGPuki

After the Giants netted a field goal, Jamal Agnew provided the biggest play of the game, on an 88-yard punt return for a TD.

That would be the final score, as the Giants couldn't get a critical fourth down conversion at the Lions' 29 with just over four minutes to play.