Lions Rumors: Will Detroit Trade Up To Draft Sammy Watkins? 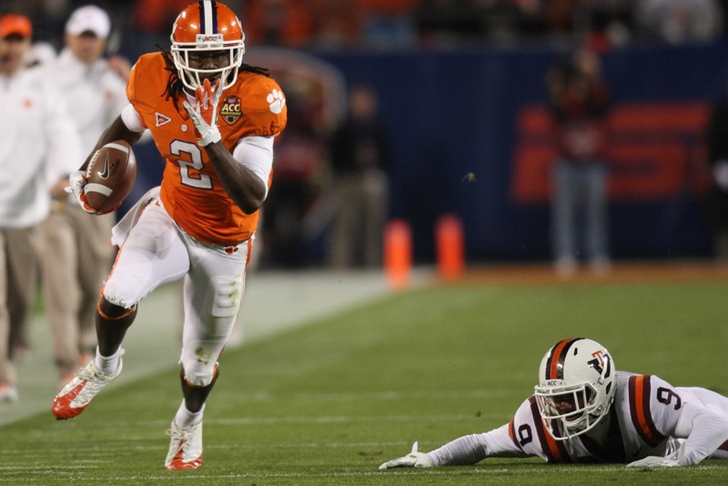 There are plenty of rumors floating around the Detroit Lions right now, but by far the most interesting one concerns their plans for the upcoming NFL Draft.

The Lions are currently slated to draft 10th, and there have been a variety of theories floated about what they could end up doing with the pick. While analysts originally predicted that Detroit would target a wide receiver, that seemed less likely when the team signed FA WR Golden Tate last month. With Tate and Calvin Johnson, Detroit seemed to have their starting wideouts penciled in, and speculation shifted to them targeting a defensive back.

Our own draft analyst currently has the Lions taking Oklahoma State CB Justin Gilbert, but word out of Detroit suggests the Lions are once again making eyes at a wide receiver.

Sammy Watkins is currently in Detroit visiting the team, and there are individuals in the Lions organization that believe Watkins has can't-miss potential - they've been so impressed, in fact, that the team is willing to deal other picks just to make sure they land the Clemson playmaker. Detroit Free Press writer Dave Birkett confirmed Tuesday that the Lions are currently weighing a move that would guarantee them Watkins:

The #Lions have put a lot of time into Watkins as everyone knows this spring. Trying to figure if it's right for them to move up and get him

The St. Louis Rams have put the second overall pick up for grabs, and if Detroit is willing to meet their asking price, they'll move up for Watkins. Given the holes in Detroit's secondary and elsewhere on the roster, there are plenty of fans who'd prefer the team stand pat with the 10th pick...but management will ultimately be the ones who make the call. It remains to be seen whether or not the Lions are willing to make the move, but this is certainly a situation to watch as we move closer to draft day.