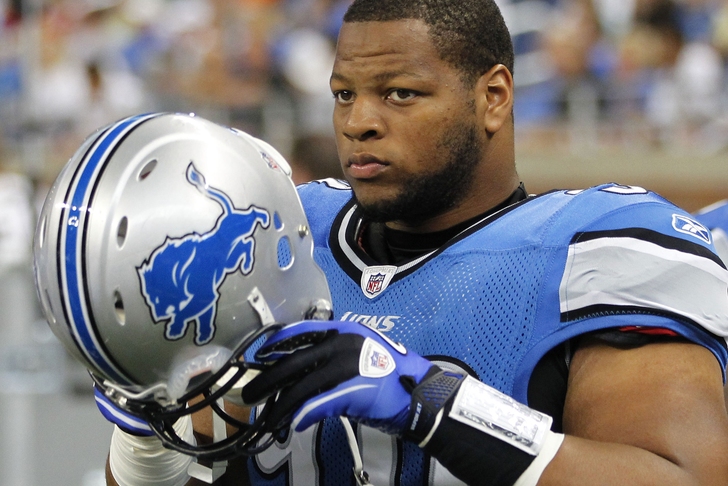 Detroit Lions president Tom Lewand said he expects the Lions will get a deal done with star defensive tackle Ndamukong Suh in the next few weeks. Suh will become an unrestricted free agent on March 10 if he doesn't agree to a deal with Detroit, but the Lions want to make sure that does not happen.

“I really do believe he’s got a lot invested in himself and the community, and in himself and the football team. He wants to have success in the NFL obviously but he wants to do that with us,’’ Lewand said on WDIV’s "Flashpoint" on Sunday. "I think there’s a very, very good chance that we can get something done with him in the next few weeks.

Suh wants to be paid like one of the top defensive players in the NFL, with rumors of demanding a $100 million deal.

Quarterback Matthew Stafford and wide receiver Calvin Johnson take up a huge chunk of salary cap space, but that doesn’t seem to be an impediment for Detroit.

“Matthew, Calvin and Ndamukong have all and very lucrative contracts under the old rookie system and even as Matthew and Calvin have done their extensions,’’ Lewand said on the show. “So we’ve done that, we’ve lived in that environment. There’s no reason we can’t continue to live in that environment. We plan really well looking out into the future and where our salary goes. I think we can do that, I have no doubt we can do that with Ndamukong, make him a continuing part of the core of our football team.

“There’s no doubt that there are trade-outs that have to happen along the way — you can’t keep everybody because it’s a hard cap. But if you have a good nucleus of guys then the draft every year comes through and you can keep adding good players to the mix.’’

Head coach Jim Caldwell and general manager Martin Mayhew have said that keeping Suh in Detroit is their priority this offseason.