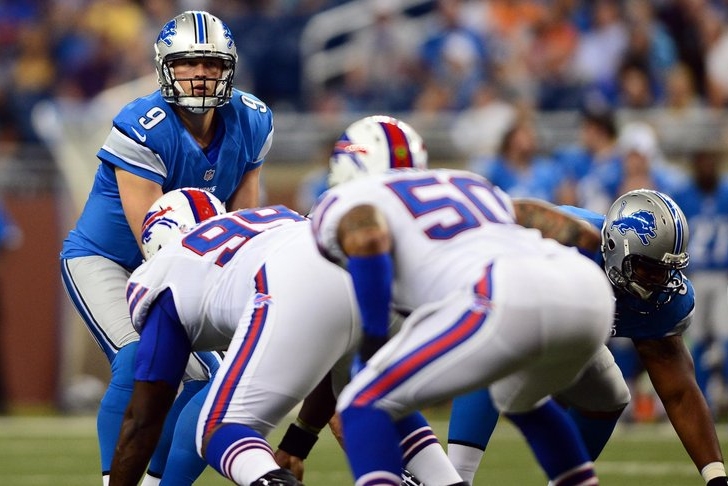 Up 14-3 at the half, the Lions looked like they were on the way to a comfortable win...but Kyle Orton and the Bills had other ideas.

After Alex Henery missed his third field goal of the day in the final minute, the Bills came right back thanks to a Kyle Orton connection with Sammy Watkins...and Buffalo's Dan Carpenter made no mistake, drilling a stunning 58-yarder to complete Buffalo's comeback.

Turning Point: Without a doubt, Henery's missed FG. While a 50-yarder was a tough ask when Henery had already missed from 44 and 47, the kick would have likely won the game for Detroit...and by missing, it handed Buffalo a perfect opportunity to steal this one out from under the Lions' noses.

Key Stat: 0/3 - Alex Henery is now 1/5 on the season after his performance today, and despite his lack of easy tries, the Lions have to be considering other kickers after today's crushing loss.

Bills MVP: After a rough first-half outing, Kyle Orton came out of halftime looking like a completely different player. He brought the Bills back from an 11-point deficit, made the clutch throw to Sammy Watkins (who had another impressive performance), and looked like a leader on the field and on the sidelines. It's too early to call him Buffalo's answer at QB, but he certainly rewarded their faith today.

Lions MVP: After WR Calvin Johnson went down with an ankle/knee injury, Golden Tate had an excellent performance in his absence. Tate had 7 catches for 134 yards and a TD on the day.

What’s Next? The 3-2 Bills host New England, hoping to gain ground in the AFC East. The Lions will travel to Minnesota, hoping to get back on track against the struggling Vikings.