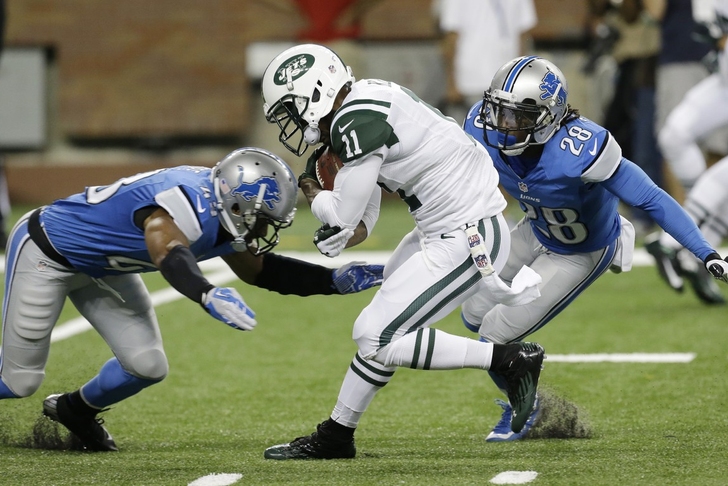 Rex Ryan's Jets are hoping to bounce back after two tough losses, and the Detroit Lions are hoping to build on an impressive defensive performance in last week's win over the Green Bay Packers. The two teams are fighting out a scrappy game in East Rutherford - here's what we saw in the first half:

Jets DE Muhammad Wilkerson got serious flak for his role in a scuffle against Green Bay back in Week 2, but the incident appears to have lit a fire under him. Wilkerson had 1.5 sacks and five total tackles last week against the Chicago Bears, and racked up a sack, a tackle for a loss and two QB hits in the first half against Detroit.

Despite intense pressure from New York's pass rush, Matthew Stafford has been solid so far in this one. At the end of two, Stafford is 16/21 with 209 passing yards, two touchdowns and a 138.8 passer rating.

Detroit Rolling Through The Air

The Lions are taking advantage of Stafford's hot hand, and Detroit's running backs haven't had to break a sweat. While six Lions have already caught multiple passes, Detroit has just six rushing attempts so far on the day.

Another Tough Day At The Office For The Jets' Secondary

The Jets were torched through the air against Green Bay and Chicago, and the Lions are exploiting the same weaknesses in their secondary. With over 200 passing yards allowed in the first half, the Jets will need to make some major adjustments.

This isn't necessarily a good thing for Detroit, but 20 players have registered at least one tackle on defense so far today. The Lions have been experimenting with several players on defense, and with Ndamukong Suh looking like he's headed elsewhere next year, it doesn't hurt to see what some of Detroit's backups can do in live action.