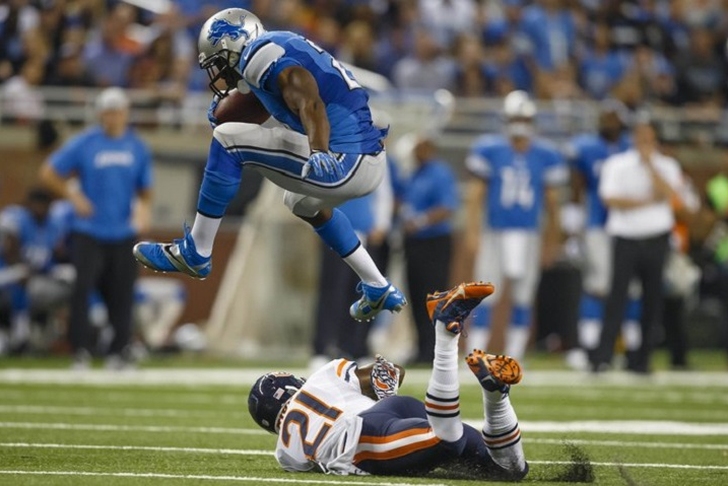 For a team that went 0-6 against NFC North rivals last season, the Detroit Lions have done a complete 180, moving to 2-0 in those contests after beating the Chicago Bears on Sunday.

A previously-undefeated Chicago team, which came into Detroit as one of the most impressive teams in the NFL so far, has been scoring defensive touchdowns at an alarming pace through three weeks. New Head Coach Marc Trestman has upheld the high defensive standard since he took over this Bears team.

Apparently someone forgot to inform the Lions.

Jay Cutler and the Bears got some of their own medicine in Ford Field when the Lions defense picked the veteran quarterback off three times and returned his only fumble for a touchdown. Ndamukong Suh and Nick Fairley spent most of the game in the backfield and Detroit sacked Cutler three times; equaling the number of times he had been sacked in the first three weeks.

Despite the flashy defensive statistics, the real story was Reggie Bush's ability to lead the Lions' offense. Though they have been one of the top offensive squads in the country the last few years, Detroit's inability to run the ball has limited them from becoming a dominant team overall.

Without a strong running game teams can't control the clock and keep their defenses off the field. A tired defense is an easy defense to score on, and as a result Detroit lost many high-scoring games en route to a 4-12 record last year.

Now, Reggie Bush has been added to the roster. Through week three Bush was mainly

featured as a receiving threat; catching screens and dump-off passes in space. Against Chicago, Bush showcased his ability on the ground by running for 139 yards on 18 carries.

But why does it matter if Bush's yards are on the ground or through the air, as long as he is getting them?

The difference is that a Lions offense with a ground threat will keep defensive coordinators up all night. Just ask Chicago's Mel Tucker, whose top-notch defense had no answer for Bush on Sunday.

Quarterback Matt Stafford (who became the NFL's leader in career passing yards through 50 games Sunday) has always shown the ability to use all of his weapons through the air. Calvin Johnson has become the undisputed best receiver in the world with Stafford throwing him the ball while guys like Ryan Broyles and Brandon Pettigrew have thrived because of their quarterback's skill.

Stafford, like fellow quarterbacks Tom Brady and Peyton Manning can make average receivers look like true offensive weapons because of his tendency to spread the ball around. When a defense has to worry about so many options downfield, the last thing they worry about is stopping the run.

An already exceptional passing attack becomes even more unstoppable when a team can gain 7.7 yards per attempt on the ground. No matter how strong a defense is, there is no way to shut down a team with so much talent in both aspects.

If the balanced attack holds up, Stafford and the Lions' offense will continue to shred every defense that lines up against them. With that offensive improvement, and a serviceable defense, the Lions could contend for a playoff spot in 2013.

For now, Jim Schwartz has his team in first place atop the NFC North.