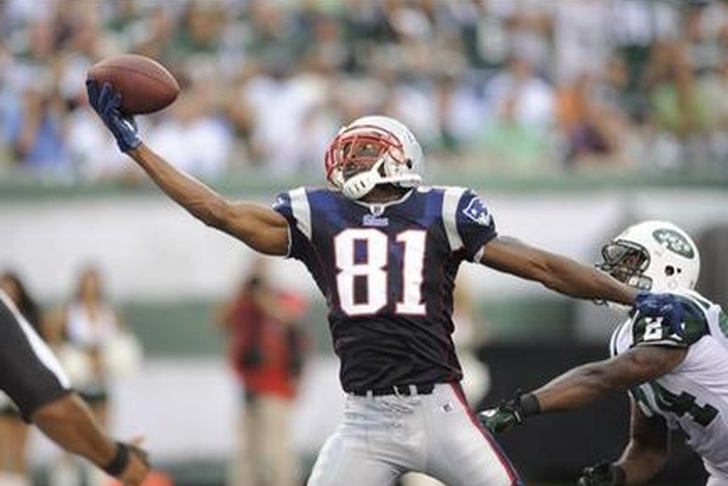 Randy Moss turned 35 on Monday. His birthday wish? To unretire and play in the NFL next year. Being 35 is old to play any sport professionally, especially the hard hitting NFL, but if Moss says he can do it, I have to believe him. Being one of the most, if not the most prolific receiver ever to step on the field, he’s at least worth giving a chance right? I’ve compiled a list of 5 reasons why the Detroit Lions should seriously consider acquiring Moss.

Lions fans have seen this scenario plenty of times: Stafford drops back to pass and throws up a prayer 50 yards down field. Now, anyone that even half follows the NFL knows that there is a 99% chance that this ball is thrown Calvin Johnson’s way, and rightfully so. Being the current best

deep ball threat in the game, Stafford and the Lions were bailed out quite a bit last year on “jump balls” thrown to CJ. Teams frequently double teamed Johnson, giving him the “Moss Treatment”, by having a safety play over top of him. But what if they couldn’t do so because the former best deep ball threat (Moss) is lined up on the opposite side of the field? Then the Lions offense could make the step from being a great offense to an elite one, joining the likes of the Saints, Packers, or Patriots. If Moss and Johnson are lined up across the field from each other, than one of the two would have a one-on-one with a cornerback. I like those odds for either player in single coverage every time. By making teams worry so much about covering the deep part of the field, the inside receivers and tight ends become more open too. Nate Burleson and Titus Young are two solid receivers who can run strong, short to medium routes, and are capable of routinely burning safeties at will. Combine them with the three headed monster Detroit has at tight end in Pettigrew, Scheffler, and Heller, and the middle of the field is dominated.

2. Detroit lets you be yourself

Much to the dismay of Head Coach Jim Schwartz, the Lions often times do what they want. And though it may cost them games, it is who this team is. With players like Suh, Delmas, Fairley, and Sheffler, Moss’s personality couldn’t fit in any better. Moss has done many outrageous things over the course of his illustrious career, but that’s what makes him so entertaining. Chad

Ochocinco (formerly Johnson) is a similar “character” in terms of being outlandish, and people either love him or hate him for it. Regardless of what people think about him as a person, as a player (until last year) his numbers didn’t disappoint. Moss’s last couple of years in the league hardly compared to the numbers he put up in the majority of his 13 year career.

3. The Lions are a Contender

Moss has achieved many accomplishments over his phenomenal career. The man has a saying named after himself for crying out loud. But getting “Mossed” isn’t nearly as cool as winning a Super Bowl. Even if Randy comes back and is still able to perform at the elite level, his career hourglass is running thin. As a result, he wants to go to a team that can contend for the Super Bowl.

The Lions are that team. In 2011, Calvin Johnson had 1,681 receiving yards, tops in the NFL, and was the Lions only Pro Bowler. Matthew Stafford finished third in passing yards throwing for 5,036. Super Bowl MVP Eli Manning had arguably his best season ever, and he threw for 4,933 yards. Only Brady and Brees threw for more yards, yet Stafford didn’t make the Pro Bowl. As a team, the Lions offense finished second in the NFL in both Total offense (412 YPG), and Passing (380 YPG), only trailing the Saints in both categories. Unfortunately that’s who the Lions got matched up with in their first playoff game since 1999. And to make matters worse, they had to play them at home where the Saints are tougher than leather. The Lions finished with a 10-7 record, and in the regular season tied for fourth best in the NFC, and tied for 7th best in the entire league. If that doesn’t make the Lions seem like they’re contenders Randy, than this should. The Lions finished with a better regular season record (10-6) than the 2012 Super Bowl Champion Giants (9-7).

4. Schwartz is a Player’s Coach

Until this past year the Lions hadn’t made a playoff game since the 1999 season in which they went 8-8 and lost the Wild Card game to the Redskins 27-13. From that time until now, the Lions

have had 7 coaches ending with Schwartz who has been their leader since 2009. He is a player’s coach which the Lions have bought into. It has been over a decade since the Lions have had a coach they will go “all out” for every Sunday. Schwartz is never satisfied and never gets over excited when the Lions exceed expectations like they did last season. He has the drive of a champion, and that has become contagious in Detroit. Schwartz also knows how to handle his players. Even though the Lions seem to be out of control sometimes,

Schwartz is in command. He has to manage wild man Ndamukong Suh. Suh has been penalized and fined frequently over his short NFL tenure. Suh had the second, “Stomp Heard ‘Round the World” (Albert Haynesworth had the first in 2006 when he stepped on the head of helmetless Cowboy Andre Gurode). The spectacle, which occurred on national TV during the Lions-Packers Thanksgiving Day Game, was unexplainable but not so surprising. Suh was suspended 2 games, the second player in the history of the NFL to receive a multiple-game suspension. Suh apologized repeatedly and handled the remainder of the season in an appropriate manner. Schwartz is the man to thank for that. I truly believe he has Suh on the right path now and can lead Moss down a similar path. A path that will let him flourish in Detroit, while still being himself.

The city of Detroit doesn’t receive a lot of press, and when it does, it is mostly negative. With the economy struggling like it has the last few years, no place has felt it harder than the Motor City. The die-hard Lions fans have stuck with their team through the good times (few) and the bad

times (majority). But the 2011 season brought something these people desperately needed, hope. With Johnson and Stafford getting their first full season together they led the Lions to a grand season. The city and its fans have woken up, and there is a sense of excitement and optimism in the air. The Lions are so close to becoming Super Bowl Contenders. A few more DB’s and linebackers will help strengthen a respectable defense. With another solid running back thrown into the mix the offense should be even better than last year.

But what would be the “cherry on top”? A wide receiver, of Moss’s caliber and name recognition. A hero to ride in, and be the final piece to a Super Bowl push. So what do you say Randy, want to solidify your legacy as the best receiver ever to play the game? Detroit, with its gun-slinging QB, Megatron receiver, and driven coach is the destination for you. Together, you and the Lions can each win a first coveted Super Bowl, and reserve a spot in NFL glory.