Nuggets takeaways: Why Jamal Murray’s monster dunk that “got the building lit” should have counted 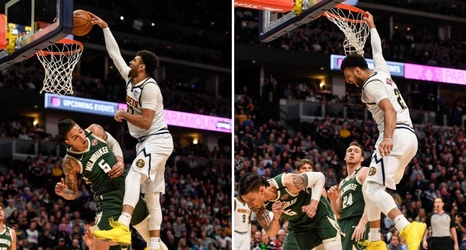 Nuggets point guard Jamal Murray threw down one of the best dunks you’ll ever witness. And, the only thing crueler than his posterization of Bucks forward D.J. Wilson Monday night at the Pepsi Center was an offensive foul call that waived off the slam.

The dunk came with 9.8 seconds left in the third quarter of the Nuggets’ 109-95 win against the G-League Bucks. Was it really a charge?

Yes, Murray’s left forearm connects with Wilson in mid-flight, and it helped Murray climb up to hammer the basketball down as Wilson hit the deck.