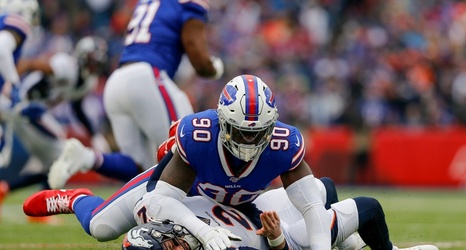 In Sunday’s 20-3 win over the Broncos, Buffalo Bills defensive end Shaq Lawson had only the second two-sack outing of his 46-game regular season career.

The key for Lawson’s success: He wasn’t blocked on either sack.

On third-and-3 in the second quarter, Lawson rushed unaccounted for from right end for the sack in 3.39 seconds when tight end Troy Fumagalli went out on a route and left tackle Garett Bolles blocked down on an interior lineman.

On third-and-3 in the third quarter, Lawson was lined up inside and split center Connor McGovern and left guard Dalton Risner, both of whom appeared to think the other had Lawson, for the sack in 2.