Denver Broncos: Right tackle options if Ja’Wuan James is out 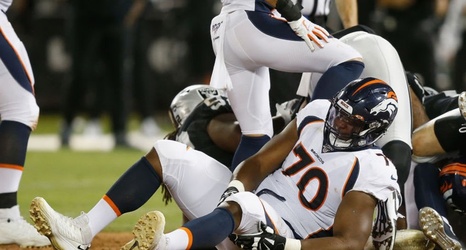 OAKLAND, CALIFORNIA - SEPTEMBER 09: Ja'Wuan James #70 of the Denver Broncos holds his leg as he lays on the ground in the first half against the Oakland Raiders at RingCentral Coliseum on September 09, 2019 in Oakland, California. (Photo by Lachlan Cunningham/Getty Images)

Before the 2020 season began, right tackle Ja’Wuan James opted out of the season, putting the position in an unknown circumstance. In response, the Broncos signed Demar Dotson, the long-time Tampa Bay Buccaneer.

Dotson filled in well, starting eight games. Elijah Wilkinson was less than spectacular, but he was serviceable in the nine games he appeared in.