Denver Broncos mock draft: Trading down and loading up on defense 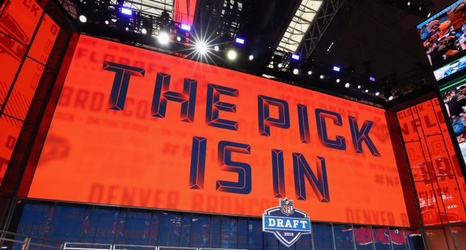 ARLINGTON, TX - APRIL 26: A video board displays the text "THE PICK IS IN" for the Denver Broncos during the first round of the 2018 NFL Draft at AT&T Stadium on April 26, 2018 in Arlington, Texas. (Photo by Ronald Martinez/Getty Images)

Mock drafts are fun, and they are actually a useful tool used by many in efforts to foresee what is the best possible outcome for a team’s upcoming draft class. Front office executives use them, fans and media create them, and all football fans enjoy them. For myself, I have created several to see what route I think would help this Denver Broncos roster be the best it could possibly be, and ultimately, this was created in an attempt to dethrone the Kansas City Chiefs.