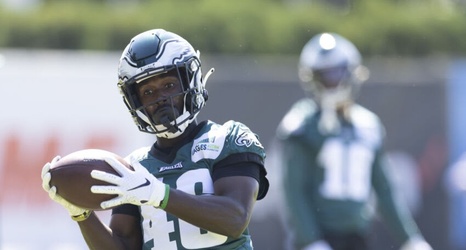 PHILADELPHIA, PA - AUGUST 05: Adrian Killins Jr. #46 of the Philadelphia Eagles catches a pass during training camp at the NovaCare Complex on August 5, 2021 in Philadelphia, Pennsylvania. (Photo by Mitchell Leff/Getty Images)

The Denver Broncos had some players leave the building on Tuesday, but one new player joined the roster as well.

Like every other team in the league, the Broncos had to trim their roster to 85 players on Tuesday. With LeVante Bellamy being one of the names on that list, a spot opened up at the running back position and Adrian Killins was signed to the roster.