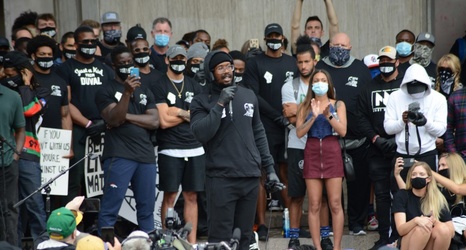 After a march through downtown, nearly 50 Broncos players and 20 coaches stopped outside the Denver Performing Arts Center, joined by hundreds. The plaza was packed to protest racial inequality and police brutality, nearly two weeks after George Floyd died in Minneapolis police custody, his head pinned to the asphalt for 8 minutes, 46 seconds.

And if there was one unforgettable image, it was Sutton, the back of his T-shirt saying, “If You Ain’t With Us, You Against Us.