Broncos: McTelvin Agim is not a lock for a roster spot 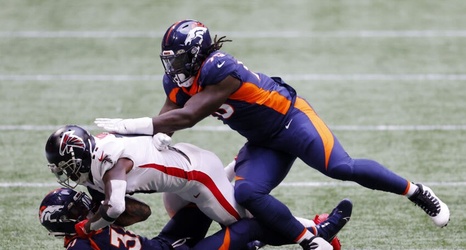 ATLANTA, GEORGIA - NOVEMBER 08: Justin Simmons #31 and McTelvin Agim #95 of the Denver Broncos tackle Julio Jones #11 of the Atlanta Falcons during the first half at Mercedes-Benz Stadium on November 08, 2020 in Atlanta, Georgia. (Photo by Kevin C. Cox/Getty Images)

Denver Broncos defensive lineman McTelvin Agim is getting ready to enter year two in the NFL.

The 2020 third-round pick is also going to have to prove he belongs this summer. Despite his high draft status a year ago, the 23-year old does not have a roster spot locked up.

That is not something that you often say for a player who was drafted in the top 100 entering their second year in the league, but McTelvin Agim is in that situation.