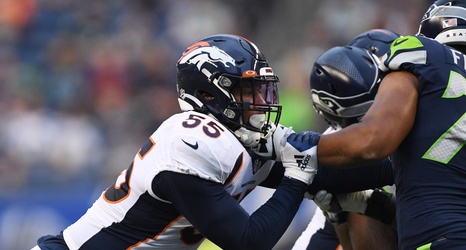 Eighteen days after they wrestled to the ground in a training camp practice, Broncos outside linebacker Bradley Chubb and left tackle Garett Bolles tangled again late in Wednesday’s workout.

“I know what the headline is going to be: Bradley Chubb and Garett Bolles at it again,” Bolles said.

The kerfuffle began on the first play of a move-the-ball period — starting offense vs. starting defense — during the last period of the workout. Chubb jumped off-sides, but thought Bolles committed a false start penalty. Coach Vic Fangio put the penalty on Chubb.

On the ensuing snap, Chubb tried to get around the outside edge of Bolles, who took him down and may have been called for a penalty.