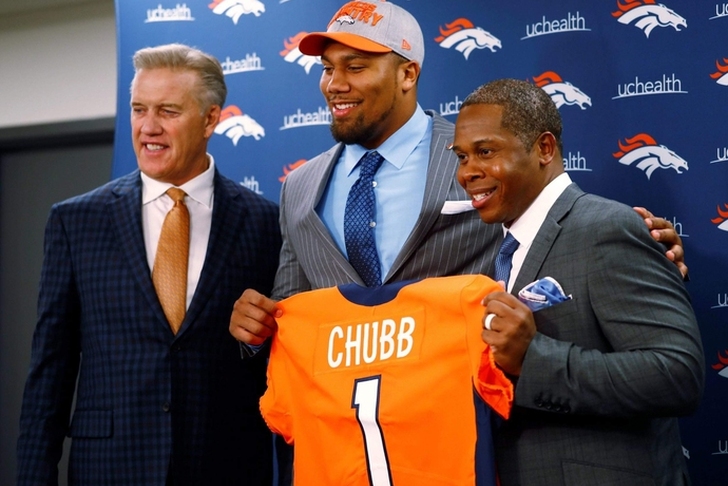 USA Today
Grade: A
Breakdown: "GM John Elway must be living right with a gift like pass rusher Bradley Chubb sitting there at No. 5. He could restore this defense to dominance. Third-round RB Royce Freeman could make Broncos Country forget C.J. Anderson, and second-round WR Courtland Sutton may eventually do the same to Demaryius Thomas. Elway appeared to find a lot of potential contributors in the middle rounds. And given how well QB Case Keenum has apparently fit into this locker room, probably wise for Elway to resist the urge to draft another quarterback."

ESPN
Grade: B+
Breakdown: "We thought Denver might take a quarterback at No. 5, but with Baker Mayfield and Sam Darnold off the board, they went best player available. Bradley Chubb is the best pass-rusher in this class by far. He's not a perfect fit for Denver's 3-4, but you have to find a way to get him on the field next to Von Miller. He's too talented. The Broncos' defense regressed in 2017 -- the Rams say "thanks" for Wade Phillips -- and ranked only 22nd in the league in sacks with 33. With Miller and Chubb on the field, they'll get after quarterbacks.

"Running back was one of the Broncos' biggest needs after C.J. Anderson was released, and there weren't many guys available at 71. Royce Freeman isn't a big factor in the passing game, but he was the best back left on my board. He had 60 rushing touchdowns at Oregon and packs short-yardage punch at 230 pounds. John Elway & Co. took two receivers to help out new quarterback Case Keenum. Courtland Sutton (pick 40) is a big, raw target. McShay called him a "finesse" receiver, and I agree. You want to see him use his frame better to block off cornerbacks. DaeSean Hamilton (pick 113) impressed me at Senior Bowl practices and tested better at the combine than I expected. Possible steal.

"Denver dealt Aqib Talib in the offseason, and I expect former first-round pick Bradley Roby to take that spot. But Isaac Yiadom (pick 99) is a solid player and a big, 6-1 corner who should get snaps. I like Josey Jewell (pick 106) as a dependable two-down inside linebacker, but he doesn't have the speed to cover running backs or tight ends. Troy Fumagalli (pick 156) could fill a role as a second or third tight end."

Bleacher Report
Grade: A
Breakdown: "The Denver Broncos had arguably the best draft haul in the league. Few expected defensive end Bradley Chubb to fall to No. 5, giving the Broncos an elite pass-rush rotation of Von Miller, Chubb, Shaquil Barrett and Shane Ray. Although it may have made sense to add a quarterback, the staff has entrusted Case Keenum to compete for a Super Bowl, and spending a premier pick on a backup quarterback wouldn't have helped the team this year.

"Day 2 brought incredible value to the Broncos. They added a Demaryius Thomas clone in Courtland Sutton, a starting running back in the athletic and productive Royce Freeman and defensive back depth in Isaac Yiadom. It's possible their first five picks will earn starting jobs this year.

"General manager John Elway continued to find depth with high-floor linebacker Josey Jewell, receiver DaeSean Hamilton and an expected contributor in tight end Troy Fumagalli. Hamilton was a luxury value at that point, but the rest of the Broncos' needs were addressed in some form. Only the right guard position remains a question mark entering training camp."

SB Nation
Grade: B+
Breakdown: "Getting Bradley Chubb and to go along with Von Miller sets Denver up with one of the best pass rush pairs in the NFL. It was a surprise that Chubb was still available at fifth overall. He’s a player who is just as good against the run as he is rushing the passer. Maybe more importantly, he can keep some double teams off Miller.

"Denver also took mirror versions of some wide receivers they already have on the roster. That would be Courtland Sutton being the new Demaryius Thomas and Daesean Hamilton the new Emmanuel Sanders. It makes you wonder what they’ll do with the veteran players, because Sutton and Hamilton are NFL starters.

"The Broncos got another weapon on offense in the third round with Oregon running back Royce Freeman. He’s a power back who can carry the load for Denver. He’s a better runner on the edge than you’d think. Cornerback Isaac Yiadom is a nice back of the roster dime player, at worst. Fourth round linebacker Josey Jewell is a tackle machine. He could push for a spot in the starting lineup.

"The knock on this draft class is that the offensive line wasn’t really addressed."

Yahoo Sports
Grade: A
Breakdown: "The Broncos had a pretty easy pick when Bradley Chubb fell to them at No. 5. Home-run pick. The draft might turn, good or bad, on whether size-speed receiver Courtland Sutton develops into a No. 1 receiver out of the second round. That could happen. I really liked the third-round pick of running back Royce Freeman, who seems like a safe bet to be a very productive early down back for Denver. There were other picks who were college stars: Iowa linebacker Josey Jewell, Penn State receiver DaeSean Hamilton and Wisconsin tight end Troy Fumagalli. Just because the Broncos drafted a lot of big names doesn’t mean they’re good picks, but the Broncos got plenty of players who we know can play well on a high level. This group should be ready to contribute immediately."

Sports Illustrated
Grade: A-
Breakdown: "John Elway understands what a perplexingly large number of fans and media do not: Denver’s Super Bowl window is still open. This defense is not much different than the one that brought home a Lombardi Trophy in 2015, especially now that Bradley Chubb is filling the void left by DeMarcus Ware. With Chubb joining Von Miller, Shane Ray and Shaquil Barrett, Denver has four dynamic, flexible pass rushers, whom you’ll see all on the field together in certain passing situations.

"Offensively, receiving options were needed behind Emmanuel Sanders and Demaryius Thomas. Those should be found between Courtland Sutton, DaeSean Hamilton and tight end Troy Fumagalli. Plus, getting a bruising runner like Royce Freeman amplifies what they have in starting running back Devontae Booker.

"The only somewhat curious pick of the Broncos’ draft was cornerback Isaac Yiadom in the third round, given that Brendan Langley was drafted in this round a year ago."