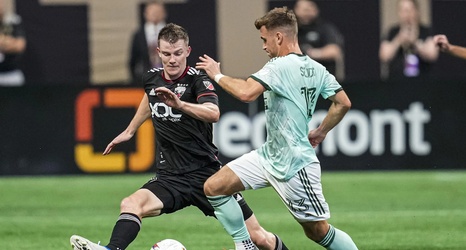 It was a gritty Sunday afternoon matchup between D.C. United and Atlanta United that ended in a 3-2 loss for the Black-and-Red.

While the first half was scoreless, it wasn’t without drama. D.C. United’s leading goalscorer, Taxi Fountas, found himself the target of the 5 Stripes' ire. Drawing fouls from the moment he stepped onto the field, it quickly became a dangerous situation for the striker. By the 29’ substitution that saw Ola Kamara enter the match for Fountas, he had taken too many hard knocks - including one to the head.

Early in the tense first half, Fountas and Ravel Morrison had both found opportunities for the Black-and-Red but missed their attempts.