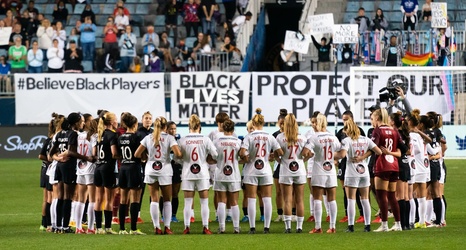 The Washington Spirit and NJ/NY Gotham FC had to settle for a scoreless draw tonight at Subaru Park. However, despite the playoff implications of the game, much of the focus was understandably on the reckoning around the NWSL concerning abusive situations at multiple clubs.

A day after players called for owner Steve Baldwin to sell his share of the club to Y. Michele Kang, both teams — including benches — chose to come together at midfield during the 7th minute. The NWSL Players’ Association Twitter account tweeted out this statement at the same time calling for further investigations of abuse and misconduct at every single club around the league:

The early exchanges were remarkably even, with the Spirit defusing threats as Gotham tried to play in behind while Washington couldn’t quite unlock the Gotham back line with possession.